Hiding your privates from StyleCop

Apparently there is. Jason Allor kindly left a comment saying that it can be configured through the StyleCop settings dialog in Visual Studio.

I took a look and initially didn’t find it. I didn’t find it because I assumed there’d be different rules for public and private entities. But there’s not, you can decide at the rule type level: 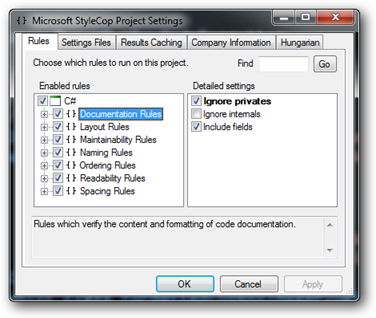 It’d be nice to have separate rules for public and private. Currently, I’ve turned off all Documentation rules because I don’t like being warned that I haven’t commented private methods. However, I’d still like it to give me all the other great warnings if I do decide to comment a particular private method.

← Back to all posts

Based on the theme by Bradley Taunt.
View the Github repo.